Lavida Reaves spent more than a decade working as en early childhood educator at a day care center, nurturing young minds and bodies day in and day out throughout most of her twenties, while the infants’ and toddlers’ parents earned livings in other professions.

At her peak, after earning an associate’s degree in early childhood education, Reaves said she made $1,200 a month working for a small, community-based program in North Carolina.

She loved the tightknit community her employer, Excel Christian Academy, provided. But she simply could not make ends meet, and pursued a bachelor’s degree so that she could transition to working in the public school system.

“The only reason why I left was because I couldn’t afford to care for my family,” Reaves, 32, told CBS MoneyWatch. “Now, working with the school system, I’m at $5,800 a month. It was a big jump.”

She’s not the only child care worker who has left a low-paying job in pursuit of a living wage. Early childhood educators across the country earn a median wage of $11.65 an hour, according to the 2020 Early Childhood Workforce Index from the Center for the Study of Child Care Employment (CSCCE) at the University of California at Berkeley. Black early educators on average are paid $0.78 less per hour than their White peers, CSCCE reported.

Preschool teachers and directors of child care centers or preschools also earn low wages, while kindergarten teachers earned $32.80 in median hourly wages in 2019, CSCCE found, based on a survey of Bureau of Labor Statistics data.

For a single adult with no children, median child care worker wages are considered livable in only 10 states, according to the report. The median gap between a child care wage and the livable wage threshold across all states is -$0.96 an hour, the researchers found.

“This largely female workforce has been bearing the brunt of lack of investment for many years and many within this workforce have to turn to public assistance to get by. Even in the best of times, before the pandemic, early educators were already among the lowest paid workers in the country,” Caitlin McLean, author of the CSCCE report, told CBS MoneyWatch.

McClean doesn’t blame child care providers, about 80% of which are small, community-based programs. Many even operate out of caregivers’ homes.

“They can’t raise wages because the economics don’t work. Right now, parents across the country are already cost-burdened by child care and can’t pay any more, but at the same time early educators are subsidizing the system with their low wages,” she said.

The undervalued, but ever important, early education workforce undergirds the economy by allowing parents with children too young to enroll in public school systems to hold jobs themselves, advocates for child care reform say.

Indeed, the industry’s contraction during the pandemic has driven many working mothers out of the their jobs and careers. The coronavirus is responsible for nearly three million women leaving the U.S. labor force over the past year, in an exodus that reflects the broken child care system.

“We are the workforce that drives the workforce. Without us in place, parents cannot remain at work, return to the workforce, or even look for work,” said Davina Woods, director of the Excel Christian Academy and Reave’s former employer in North Carolina.

Child care should be universal and federally funded, much like our society’s physical infrastructure, including roads and broadband internet, according to McLean.

“It’s going to require significant increases in public funding and we should understand if we want a good service we are going to need to pay for it,” she said.

Woods said the pandemic has only exacerbated longstanding struggles within the industry. Many facilities were forced to close as families withdrew their children over COVID-19 fears, and programs incurred the added costs of increasing sanitation and adhering to pandemic safety protocols.

In the first six months of the pandemic, nearly 200,000 child care workers lost their jobs. As of August 2020, the industry was 20% smaller than it was in February that year, before the pandemic raged across the country, according to a CSCCE calculation.

“The industry is collapsing because there is no pipeline for the early education workforce. It’s not a viable option,” Woods said. “There is nothing. We get low wages, a lack of benefits and a lack of respect that does not allow us to sustain and retain an educated workforce.”

Most of her own 14 employees, who teach roughly 50 children ages three to five, work second and third jobs at places like Target, Woods said. Some even rely on federally subsidized housing and food programs to get by.

“The funding isn’t there to increase wages and provide stability, so my teachers continue to have to work multiple jobs because they still don’t make a living wage,” she said.

There’s a role businesses can play, too, in both solving the child care crisis and retaining talent at their own companies, according to prominent executives.

David Merage, creator of the Hot Pockets snack and current head of Consolidated Investment Group, believes businesses should contribute to a child care savings account for employees, like many companies do with 401(k)s and health savings accounts.

It should be incumbent upon companies to help ensure their employees have access to child care so that their workers can better focus on the task at hand — and benefit the companies they work for.

“I want my employees to be happy so they are concentrated on work rather than worrying [about child care],” Merage said.

Pyrena Hui, who with her husband, Oscar Tang, runs a child care practice out of their San Francisco home, said the pandemic has only compounded existing financial challenges. 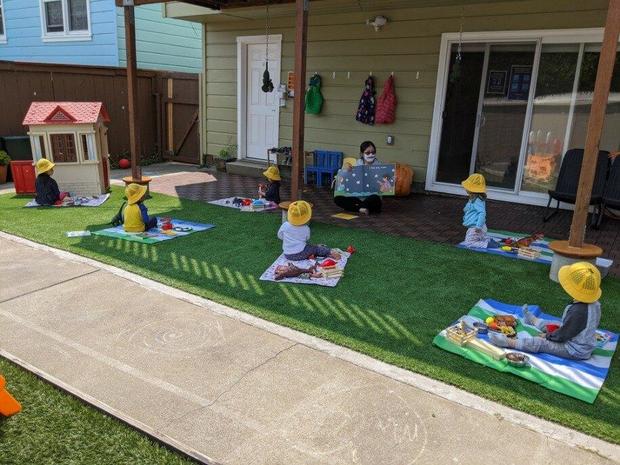 Pyrena Hui reads to children who are socially distanced outside at her home-based child care facility in San Francisco. Courtesy of Pyrena Hui

In March, she was caring for just one child, versus the usual 14 children that her home-based facility can handle. Her costs have gone up, too.

“With fewer families, our income decreased. But we also needed to buy more personal protective equipment, our water bills were up because we had to keep washing our hands, and we had to pay extra to disinfect the facility two times a day,” she said.

Numbers have since rebounded. Currently, nine children are enrolled, but social distancing makes it hard to accommodate a full class, and right now, she isn’t taking a salary.

“For now I am not paying myself until we go back to full capacity. At least now our income is better than before, with more parents deciding to return to the program,” she said.

She agrees that workers like herself have largely been ignored.

“Sometimes people don’t understand the importance of child care for economic recovery. Parents should be ready to go back to the workforce, but if there is not enough child care, they cannot go back. Young infants are not the same as school-aged kids, they can’t sit in front of the computer and do distance learning,” she said.

“An opportunity to reset and rebuild”

Child care businesses like Hui’s and Woods’, whose predicaments are similar to many others across the country, could use some federal assistance to help boost workers’ pay while also keeping rates affordable for families.

“This is not the fault of individual providers struggling to provide care in their communities in these impossible situations,” said Ai-jen Poo, the co-founder and executive director of the National Domestic Workers Alliance. “What we need to do, now that this pandemic has revealed just how essential our caregiving infrastructure is, is invest our public dollars in these systems. This is a need that the market alone can’t solve. We need public investment in order for this to work.”

At the very least, the pandemic has shined a light on how crucial child care workers are to supporting a healthy economy, Poo said.

“Now we are in this moment of rebuilding our economy and we have an opportunity to reset and rebuild the child care infrastructure to support families, jobs and the workforce,” Poo said.

Would go back in a heart beat

Indeed, early childhood care givers can be passionate about the work they do and many more would likely be up to the task if only it allowed them to put food on the table.

Reaves, now part of the public school system, said she still misses working with younger children, despite the unlivable earnings.

“I don’t think that now working in public schooling I have the same presence in children’s lives as I did working in early childhood education where I was able to learn [about] each child, teach them, help them learn at their own pace and in their own way. It’s not personal anymore,” she said.

If it weren’t for the money, she’d go back in a heart beat.

“I would rather be in a child care setting but I can’t take care of my family that way. I have three sons after I left from the child care center and went into the school system; my health care [benefit] is, wow, over the top. My pay rate is amazing right now, and I wouldn’t have been able to get the home I now live in if I hadn’t stepped out and taken that job opportunity. It was holding me back.”

Aphria CEO hopes weed is fully legalized in U.S. in 2...

Aphria CEO hopes weed is fully legalized in U.S. in 2...