Wilmington, Delaware – He’s not on the ballot for mayor in Wilmington, but Joe Biden’s hometown is getting some attention as a result of his presidential candidacy.

Amid the 19 general election campaign trips to seven battleground states, Biden has spent his down time in Wilmington, a fitting backdrop for the man who ditched Washington most nights and took Amtrak home from his Senate job to be with family.

If elected, Biden would be the first president from Delaware. And Wilmington — population 70,000 — would join the list of obscure presidential homes that includes Jimmy Carter’s Plains, Georgia; George W. Bush’s ranch in Crawford, Texas; and President Trump’s Mar-a-Lago resort in Palm Beach, Florida.

“The city’s stature has been enhanced by Joe’s running,” Wilmington Mayor Mike Purzycki told CBS News. “It is still a big deal for people to see the potential next president of the United States, it kind of energizes the city being on the lookout for Joe and the caravan that follows him.”

Since June, the campaign has hosted at least 15 local stops in Delaware, offering Biden a socially-distanced venue outside of his basement studio to address national issues during the COVID-19 pandemic. 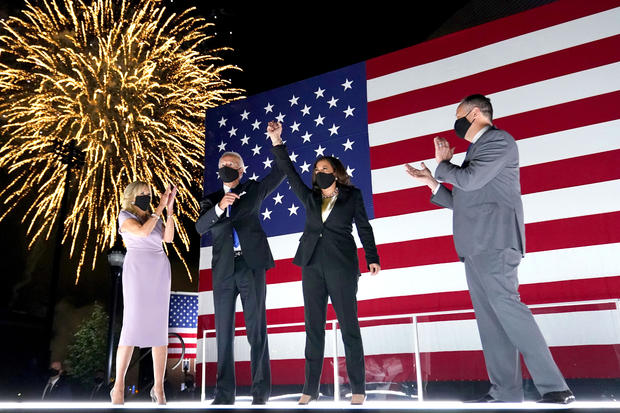 Joe Biden, with Kamala Harris, as fireworks go off during the fourth day of the Democratic National Convention, Thursday, August 20, 2020. Andrew Harnik / AP

Biden’s hometown pride was most evident during the hastily-arranged, scaled-back Democratic National Convention held in Wilmington in August — when on the final night, he pulled down his black face mask with fireworks blasting overhead, and shouted “welcome to Wilmington!” from an outdoor stage. He’d just delivered his nationally-televised acceptance speech inside a room with just a few reporters watching at a downtown events center that usually holds far less prominent trade shows or conventions.

When racial justice and climate crises erupted this summer, Biden addressed the national issues from his familiar turf.

The death of George Floyd in Minneapolis in May prompted Biden’s first local, in-person campaign event, as community and religious leaders were invited to the pews of Bethel AME church in Wilmington for a frank conversation on racial equality. 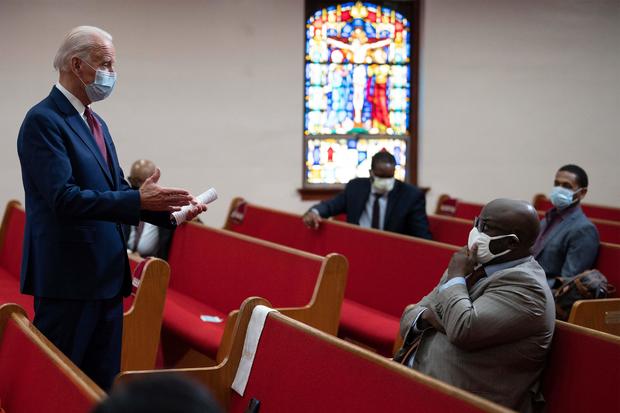 FILE: Joe Biden meets with clergy members and community activists during a visit to Bethel AME Church in Wilmington, Delaware on June 1, 2020. Photo by JIM WATSON/AFP via Getty Images

On September 14, Biden chose an outdoor spot at Delaware’s Natural History Museum to address the raging wildfires in California approximately 2,900 miles away. And some local campaign venues, like the Alexis l. du Pont High School gym where Biden formally announced Senator Kamala Harris as his running mate in August, seem more logistically significant, since the school is just a few blocks from the Biden home.

At other times Biden uses these hometown campaign stops to take a trip down Memory Lane.

“This is a special place for the Biden family,” Biden said in September at the West End Neighborhood House during an economic speech. “My daughter Ashley, a social worker, was a case worker here helping young people who were aging out of foster care. When my son was the attorney general, Beau, came here, right here, to learn more about job training programs for those working toward a GED or certificate for a good paying job.”

On July 28 during remarks on economic equity at a downtown community center, Biden began by recalling, “This center was named after my buddy, Hicks Anderson, he was everybody’s friend,” Biden said at a long-standing community center while addressing on racial economic equity. “Hicks and I went way, way back. Just walk around Wilmington and everyone has a story about Hicks.” 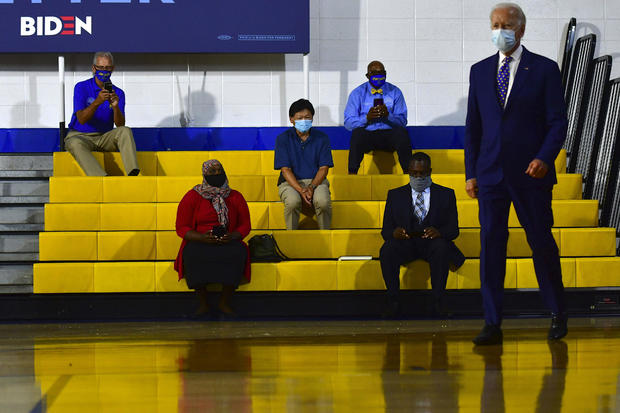 But part of Biden’s story with Anderson went unmentioned: In the 1970s, Biden and Hicks stood alongside other community leaders to question the Wilmington School District busing program, according to Anderson’s son, Delaware State Representative Nnamdi Chukwuocha. Biden’s local history on busing became a flash point last year when then-rival Harris questioned the opposition during the first Democratic primary debate.

“Mr. Biden stood right along with my father and these other supporters saying that we didn’t need busing, we didn’t need to put our children on buses to suburban areas for them to be successful. What we really needed was support here, the resources here inside of our community schools,” Chukwuocha told CBS News.”So people really took it out of context but for me this was my life, I lived it, I heard those conversations around the table.”

Biden’s neighborhood pride is no recent development, but part of a national campaign playbook already filled with a lifetime of Delaware parables and facts that shaped the 77-year-old politician since he moved here from Scranton, Pennsylvania, in 1953.

He attributes his early support of same-sex marriage in part to a moment in high school when he saw two men “in suits” kiss in downtown Wilmington. In Cedar Rapids last year, Biden repeated his father’s explanation at the time: “It’s simple, Joey, they love each other.”

When on the trail, the former vice president also tries to preempt misperceptions about his home state. He repeatedly boasts about Delaware’s diversity, with the eighth-largest Black population per capita, and he also lauds the state’s agrarian sector, with its local businesses transforming chicken manure into fertilizer pellets.

Biden’s Delaware tales have also set him up for mockery during this campaign. A 2017 video surfaced with Biden recounting a 1962 argument as a lifeguard with a “bad dude” named “Corn Pop” at the local pool.

More recently, Wilmington has also been on President Trump’s mind, as he tried connecting Biden to Wilmington’s decision to temporarily remove a downtown statue of Caesar Rodney, a signer of the Declaration of Independence. Threats to tear down the statue surfaced this summer due to Rodney’s slave-owning past.

The Democratic nominee has also been providing an unexpected economic boost to some home state businesses during the pandemic.

Before it became public that Biden would not travel to the original location of the Democratic National Convention in Milwaukee, hotel managers in Wilmington said they saw August bookings ticking up, a rare occurrence this year. Bill Sullivan, chairman of the Greater Wilmington Convention and Visitors Bureau, estimated that 3,000 hotel room nights were booked near the events center where Biden and Harris spoke.

Tens of thousands of dollars in campaign spending appears to be going to other local businesses. A downtown theater, The Queen, has been converted into a temporary studio for Biden’s virtual events and press conferences, while down the street, Biden has returned to the Hotel du Pont frequently to host other events — 48 years after he celebrated his first Senate win in the hotel’s ballroom. 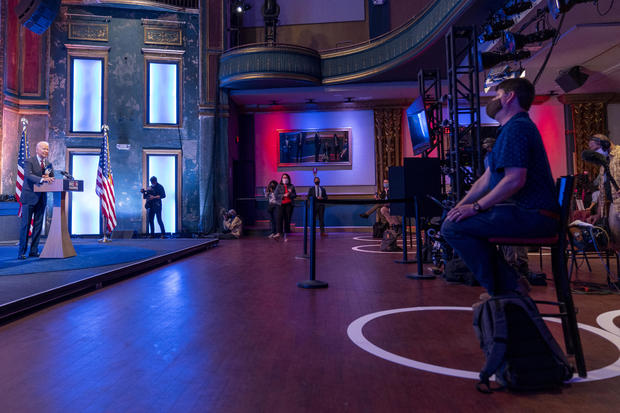 The Biden campaign in August paid at least $55,449.40 for “facility rental” and “lodging” in Delaware to a limited-liability company affiliated with Wilmington property business the Buccini/Pollin Group, Inc., which owns Hotel du Pont, the theater and the Wilmington Westin hotel next to the events center, according to Federal Election Commission (FEC) spending records. This company is run by Biden donors and a representative confirmed to CBS News these August payments were solely for Hotel du Pont events. 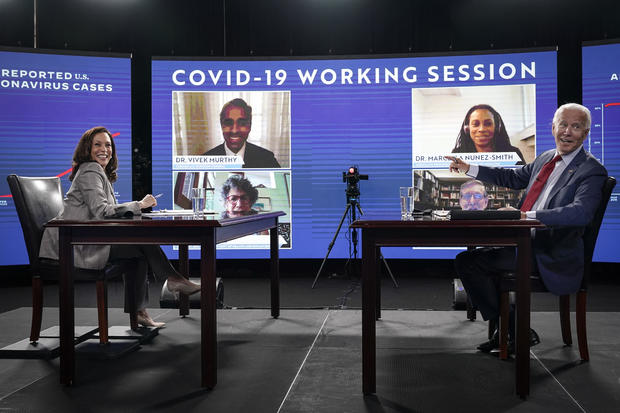 In addition to spending $7,931.25 at a local cosmetics shop on August 26 for “event services,” the campaign has spent thousands of additional dollars at local restaurants, supermarkets and stores in Wilmington and some days in Rehoboth Beach, Delaware, where the Bidens have a vacation home.

In total since the pandemic halted regular travel in March, the campaign has spent at least $110,611.42 on goods and services in the state through August, according to FEC records, but the total economic boost from the campaign apparatus is likely much larger because of the revolving door of Democratic staff, Secret Service agents and reporters in the city.

“In this time of crisis where we’ve had to be creative about how we campaign and reach voters, the whole Wilmington community has stepped up as partners in this new form of campaigning and we’re honored to have their support,” campaign national press secretary Jamal Brown said in a statement to CBS News.

From preparation of about $2,000 worth of Guzzy Q BBQ to scrambling $317 of breakfast food at EGG during the summer weekend trips in Rehoboth, local businesses seem pleased to power the campaign of the next potential president—even if it’s with pizza.

Florida man mauled by leopard after paying for ‘full-contact experience’ with...

Florida man mauled by leopard after paying for ‘full-contact experience’ with...