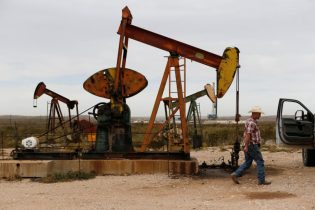 “Oil markets received a lift from the U.S. stimulus chatter, but for the most part activity remains rudderless, awash in a sea of oil,” said Stephen Innes, market strategist at AxiTrader.

The U.S. Senate on Wednesday overwhelmingly backed a $2 trillion bill aimed at helping unemployed workers and industries hurt by the coronavirus epidemic.

But with demand fast contracting and output rising, the outlook for oil remains dim.

At the same time, the collapse of a supply-cut pact between the Organization of the Petroleum Exporting Countries and other producers led by Russia, known as OPEC+, is set to boost oil supply, with Saudi Arabia planning to ship more than 10 million bpd from May.

Oil stocks are already rising with tanks around the world filling fast despite a 50%-100% jump in lease costs, as oil companies and traders scramble to park unwanted crude and refined products.

“At that tipping point, the producer surplus will become a massive logistical headache for oil storage consideration, which then opens up the trap door for oil prices to plummet below cash costs,” said Innes.

Vienna-based JBC Energy said it expected world oil demand to fall by an even larger 15.3 million bpd in the second quarter, likely pushing benchmark prices, at least temporarily, to around $10 per barrel.

“OPEC+ as an organization is of pretty limited relevance in this context, as they are neither likely to be willing nor able to stem the current demand shock,” said Johannes Benigni, chairman at JBC Energy in a note on Wednesday.

(Reporting by Roslan Khasawneh in SINGAPORE and Sonali Paul in MELBOURNE; editing by Richard Pullin)

Factbox: Layoffs in corporate Australia and New Zealand due to coronavirus

Time to Step Up: The Coronavirus Opportunity for Our Country

15 Religious Leaders Share How to Hope During the Pandemic