Fifteen years ago, the Department of Defense established a program to combat sexual assault and rape in the ranks. Since then, the military has spent hundreds of millions of dollars on prevention efforts with a stated policy of zero tolerance.

A year-and-a-half long investigation by “CBS Evening News” anchor and managing editor Norah O’Donnell and the CBS News Investigative Unit into sexual assault within the U.S. military uncovered failures by leaders to address the issue. Over the course of the investigation, CBS News spoke with nearly two dozen survivors of sexual assault, whistleblowers who worked for the military’s Sexual Assault Prevention and Response program and families of suicide victims who say the military grossly mishandled reports of sexual assault.

Steve and Stacey Burnham say their daughter, Army Private Second Class Nicole Burnham, was sexually assaulted in June of 2017, within two months of arriving at Camp Casey in South Korea.

“There was an incident involving multiple male soldiers. We know that she was held down against her will. We know that there were pictures taken,” Stacey told “CBS Evening News” anchor and managing editor Norah O’Donnell.

Two months later, Nicole was sexually assaulted a second time. She requested an expedited transfer back to the United States, far away from her assailant.

“It took them 82 days to get her out of South Korea,” Stacey said. “I don’t know what part of ‘expedited’ is 82 days. And I would say, ‘Who is there to help you? There has to be somebody you can go to.’ ‘No, there’s nobody here, Mom. Please stop asking.'”

While Nicole was waiting in South Korea for nearly three months to transfer, she faced harassment for reporting her assaults.

Official witness statements say Nicole was called a “whore,” “slut” and “deserving of rape” and that the “verbal harassment” led to feelings of “ostracism” and “self-isolation.” 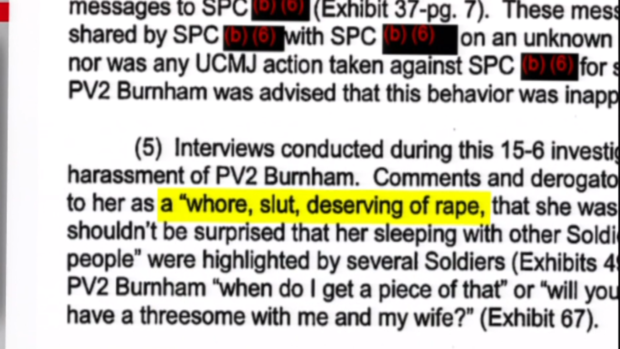 Portions of the witness statements are seen in this image.

“The Army can deploy thousands and thousands of troops during a war situation within 24 hours. And they can’t expedite our daughter off a base after two sexual assaults?” Steve asked.

At the very same time this was happening, Nate Galbreath, the deputy director of the military’s Sexual Assault Prevention and Response office, told a committee responsible for advising the Secretary of Defense that “the continued retraumatization of having to be exposed to that person or the people that impacted you in that horrific way prevents you from healing.”

Unable to leave South Korea, Nicole became suicidal. Her direct supervisor knew but failed to report her “suicidal ideation” up the chain of command, even though it was a “mandatory reporting requirement,” according to the military’s AR 15-6 investigation. 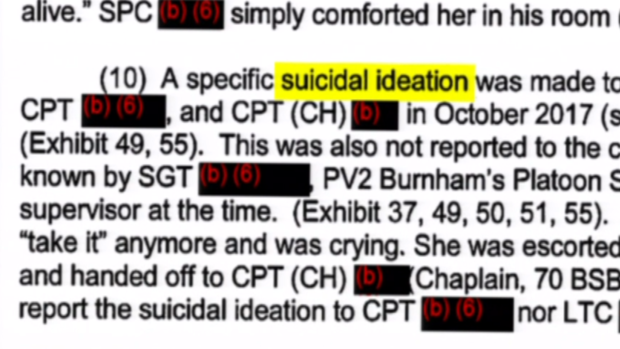 Text from the military’s AR 15-6 investigation is seen in this image.

Asked how her daughter felt about the way the military responded after she reported the assaults, Stacey said, “I’m sure she was scared to death. I’m assuming she, for lack of a better term, was like, ‘This is not what I expected. I signed on the dotted line to serve and protect my country and who is here to help me and protect me?'”

A few weeks before Christmas, Steve and Stacey welcomed their daughter home.

“You could see she had lost weight. Her hair was thinning. Even at home, when she came home, in her bedroom, she locked the door and pushed a dresser up against it. And it was like, ‘Nicole, you’re home.’ She’s like, ‘You don’t understand,'” Stacey said.

“I went to Home Depot the next day, after she was barricading her door. I said, ‘You’re going to be safe in your own home.’ I actually went and got an actual ‘lock’ lock so she could feel safe,” Steve said.

Two weeks later, Nicole had to report to her new assignment in Colorado.

Her command there did not know that she had been a victim of sexual assault.

“No, that was not communicated to them,” Stacey said. “Again, just another complete failure of the Army.”

A month after Nicole arrived at her new base, she got a call from Camp Casey saying she may have to go back to South Korea to testify.

The next morning, Nicole was found dead in her barracks room. She died by suicide.

“We have a report from the military and the very last paragraph says that they didn’t think she was ‘mentally sound at the time of her death due to multiple sexual assaults and systemic harassment over a substantial period of time,'” Stacey said. “They knew this and they did nothing. Until they sent us home a flag-draped coffin.”

The Army declined CBS News’ request for an on-camera interview, but said in a statement their thoughts and prayers go out to the Burnham family. They say the Army’s Criminal Investigation Command conducted a full investigation into Nicole Burnham’s case and took appropriate action against the reported perpetrator. The Burnhams told CBS News the perpetrator agreed to a plea deal and received an other-than-honorable discharge.

Service members or civilians who were sexually harassed or sexually assaulted by a member of the U.S. military can seek legal services with Protect Our Defenders.

Texas waitress gets $2K tip but restaurant refuses to give her...

Man Who Allegedly Attacked Trump Supporters With a Firework Arrested and...

Effort to Win Georgia Senate Races by Bringing in Out-of-Staters to...

Texas waitress gets $2K tip but restaurant refuses to give her...