Christopher Ferguson, commander of the final space shuttle flight and now a Boeing executive, has stepped down as commander of the first piloted test flight of the company’s troubled CST-100 Starliner commercial spacecraft, he and Boeing announced Wednesday. He has been replaced by NASA astronaut Barry “Butch” Wilmore.

“I’m taking on a new mission, one that keeps my feet planted here firmly on Earth and prioritizes my most important crew — my family,” Ferguson tweeted. “I’ll still be working hard with the #Starliner team and the @NASA_Astronauts on our crew.”

I’m taking on a new mission, one that keeps my feet planted here firmly on Earth and prioritizes my most important crew – my family. I’ll still be working hard with the #Starliner team and the @NASA_Astronauts on our crew. pic.twitter.com/PgdhPqwYQS

In a video attached to the tweet, Ferguson, 59 and a father of three, called his decision to step down “difficult and personal.”

“I’m deeply committed to human spaceflight, I’m dedicated to the Starliner program and I’m passionate about the team that has built her,” he said. “But this year is very important for my family. I have made several commitments which I simply cannot risk missing. 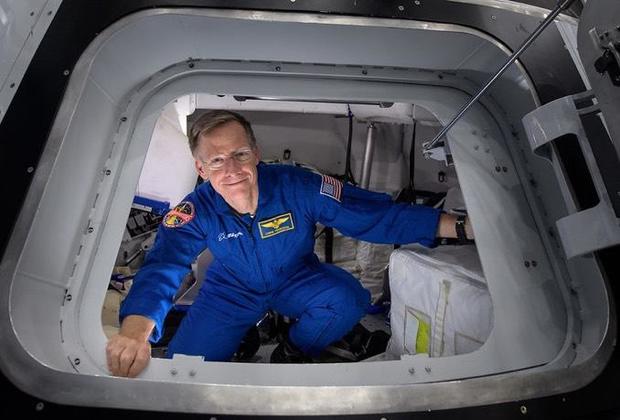 Former shuttle commander Chris Ferguson, seen in the hatch of a commercial crew ship mockup, has taken himself off Boeing’s first piloted Starliner test flight, now targeted for launch next summer, to spend more time with his family. NASA

It was the mission’s second crew change since Ferguson and astronauts Eric Boe and Nicole Mann were assigned to the flight in August 2018. Boe was pulled from the crew the following January because of an unspecified medical issue. He was replaced by astronaut Michael Fincke.

While no longer flying, Ferguson, a former Navy F-14 carrier pilot, TOPGUN graduate and test pilot instructor, will continue to play a major role in the Starliner’s development, serving as Boeing’s director of Mission Integration and Operations as well as Crew Systems.

“My personal thank you to Chris for his leadership,” said Leanne Caret, president and CEO of Boeing Defense, Space & Security. “He is putting his family first, which Boeing fully supports. We are fortunate he will continue to take an active role on the Starliner program and bring his depth and breadth of experience in human spaceflight to the program.”

Ferguson’s departure from the crew comes amid turmoil at Boeing in the wake of a problem-plagued unpiloted test flight of the Starliner capsule last December, leaving Mann, a Marine Corps F/A-18 fighter pilot and rookie astronaut, as the only original crew member on the Crew Flight Test, or CFT, mission.

Following the December flight, Boeing managers decided to launch a repeat mission late this year or early next to verify the performance of required software upgrades and other changes. That has pushed the first piloted Starliner flight to the summer 2021 timeframe, a full two years later than expected when the initial crew assignments were announced.

SpaceX, meanwhile, is gearing up to launch four astronauts to the International Space Station on October 31 following a successful piloted test flight of its Crew Dragon capsule earlier this summer by astronauts Robert Behnken and Douglas Hurley, Ferguson’s co-pilot on the final shuttle mission.

Ferguson retired from NASA after his third and final shuttle flight in July 2011 and went to work for Boeing, helping the company develop the Starliner commercial crew ship. In August 2018, to no one’s surprise, he was named to the Starliner’s first piloted mission.

“I have full confidence in the Starliner vehicle, the men and women building and testing it and the NASA astronauts who will ultimately fly it,” Ferguson said in a Boeing statement.

“The Boeing team has taken all lessons from our first uncrewed Orbital Flight Test to heart, and is making Starliner one of the safest new crewed spacecraft ever fielded. I will be here on the ground supporting Butch, Nicole and Mike while they prove it.”

Wilmore thanked Ferguson for his “exceptional leadership and insight into this very complex and most capable vehicle.”

Americans share concerns over safety and side effects of a COVID-19...

Americans share concerns over safety and side effects of a COVID-19...