At the height of the pandemic New York Governor Andrew Cuomo became a nationwide phenomenon with his daily COVID-19 briefings. Now, Cuomo and his three daughters open up about their life together during the coronavirus outbreak, as well as the stress on the governor, his new book, learning President Donald Trump had COVID-19 and more, in their first joint television interview with Tracy Smith for “CBS Sunday Morning,” to be broadcast Sunday, October 11.

“Sometimes he would come home, and you could see it on him,” said Cara Kennedy Cuomo. “And you would hear, sort of this big, deep breath that he takes. And then you would know that he is stressed.” 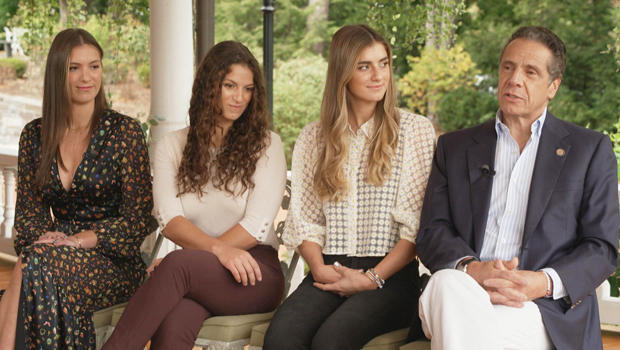 Just as the COVID shutdowns began, Cuomo’s adult daughters, Michaela and twins Mariah and Cara, moved back home with the governor, giving them an inside look at what their father went through in steering New York through this period. The daughters say that people across the world began asking the governor’s team for advice. They told their dad he needed to do more.

Those conversations resulted in the new book, “American Crisis: Leadership Lessons from the COVID-19 Pandemic” (Crown), out next week. Cuomo outlines what lessons he learned in dealing with the pandemic, and also why he believes President Trump and the federal government failed in their response.

Cuomo said he’s not taking a victory lap with the book, and that there’s more work to do. “Oh, there’s no victory here,” Cuomo said. “The game isn’t over; this is halftime in the game. Let’s learn the lesson from the first half of the game and play a better second half. But we have to play a whole second half of this game.

“And there’s going to be another virus, another infection and another bacteria. And we can’t make the mistakes we made this time.”

Cuomo and his daughters talked with Smith about being together now; a second wave of COVID; and seeing his mother in person for the first time since the pandemic began. His daughters also weigh in on whether the governor – who’s repeatedly said he’ll be governor as long as New York voters want him around – would make a run for the White House.

Michaela Kennedy Cuomo said she likes her father in New York, and that he likes it there: “But, as someone who wishes that I had someone I could vote for who would be more inspiring and someone who seems more competent or just, like, anyone in Washington who seems competent, empathetic – would make me feel a lot better,” she said. “And so if that were Dad, I’d be a really grateful and proud American. And, I guess, a busier daughter.”

Cuomo told Smith he was shocked to learn President Trump had gotten COVID-19, and called it a wake-up call for the country.

“I think this says to everyone, this is real. You can get it. Even the President of the United States can get it,” Cuomo said. “And I also hope it’s a moment where this nation just puts aside the ugly politics that has become the way of this country, you know? … This is just a moment for humanity and love and compassion. And I wish him the best. And I wish his family the best. And I hope – I’m sure they’re living with a lot of anxiety. And let’s remember that, at the end of the day, we’re all people trying to do our best. And we can disagree, but let’s just be kinder to one another. And I think this is a moment that says that also.”

‘RHONY’ cast spotted back at work in Greenport post-COVID scare